Vocal Learning and Communication in Parrots 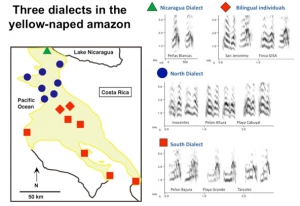 Dialectos y sus distirubuciones de los yellow-napped amazonsDialects and duets in the yellow-naped amazon: One focus of my work is a long-term study of vocal communication in the yellow-naped amazon parrot in Costa Rica. I first described vocal dialects in this parrot in 1996 (Fig 1); PhD student Alejandro Salinas-Melgoza and I continue to examine the behavioral mechanisms underlying this mosaic pattern of vocal variation using a variety of approaches including, genetic measures of dispersal, experimental translocations of birds and radio telemetry. Our results have shown that vocal dialects do not correspond to genetically distinct populations and that immigrants from one dialect to another can learn the new dialect upon arrival.We are also studying ranging patterns and habitat use in the yellow-naped amazon. Alejandro Salinas-Melgoza has tracked the movements of radio-marked parrots in two sites with contrasting vegetation density. Data suggests differences in the core areas used by parrots are related to these differences in vegetation density. The vegetation preferred by parrots at El Pelon de la Bajura, an intensive farming site, is clustered on the lowland/highlands boundaries, and individuals at this site to use a smaller area.Conversely, the Los Ahogados site shows a patchier and more dispersed distribution of the vegetation due to ranching activities. Individuals at this site used a larger area in their movements. Click on the highlighted text to view Google satellite maps showing roosting and feeding areas at each of the two sites. To better compare the differences in area used for individuals at each site, please adjust the scale of each map to 1000 ft. 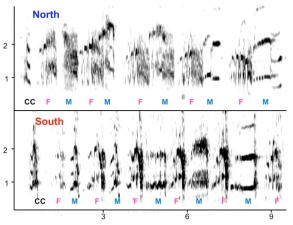 Yellow-naped amazons are also notable for their use of pair duets, which are complex and highly variable signals produced jointly by mated pairs (Fig 2). For her dissertation research, Christine Dahlin investigated the relationship between duet structure and function using behavioral observations of nesting pairs and playbacks of synthetic duets that break specific syntactical rules. Our results show that while nesting pairs will not respond to duets from foreign dialects, they do respond strongly to duets from their local dialect, even if these duets have strongly altered syntax. These results suggest that duets play a critical role in establishing and maintaining nesting territories. Work on the yellow-naped amazon has been funded by the National Geographic Society and the National Science Foundation.

Vocal and genetic variation in the thick-billed parrot: The thick-billed parrot is an endangered species found in the high-altitude pine forests of the Sierra Occidental of northern Mexico. Historically its range extended into the Chiricahua Mountains of southeastern Arizona, but it is now restricted to a few breeding colonies in Chihuahua. In collaboration with investigators from the Tecnológico de Monterrey, Pronatura, and the San Diego Wild Animal Park, my students and I are examining vocal and genetic variation in this species. Undergraduate Jaime Guerra and I surveyed vocal variation among the three main breeding colonies of this endangered species and found no consistent acoustic differences among colonies, a distinct contrast to the dialect pattern found in the yellow-naped amazon. Undergraduate Daniel Acosta and I are now analyzing patterns of genetic variation among these colonies and the U.S. zoo population using microsatellite markers; these data will help determine the degree to which different populations are genetically distinct and whether they can be mixed during reintroduction efforts. This work has been funded by grants from the World Parrot Trust, and T&E Corporation.

Spectrograms showing the similarity of an immigrant’s call to a new flock before and after imitation of that flock’s call.Costs, benefits and mechanisms of vocal learning in the budgerigar: To complement our work on wild parrots, my PhD student Anna Young and I have developed a highly tractable lab system for examining the costs and benefits of learned vocal convergence. Previous work by others has shown that budgerigars kept in small flocks rapidly converge to a shared contact call (Fig 3). In collaboration with Denis Hallford (NMSU Animal and Range Sciences), we are using experimental manipulations of budgerigar social groups coupled with behavioral observations, endocrine measures, and vocal analyses to examine the behavioral and physiological correlates of this form of adult vocal learning. We are using these data to test the password hypothesis: that flock-specific calls act as a password and learning these calls allows immigrants to gain the benefits of flock membership. 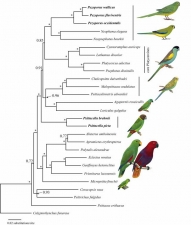 A phylogeny depicting the evolutionary relationships of the enigmatic Australo-Asian parrot genera Pezoporus and Psittacella. Illustrations by Frank Knight, design by Angela Frost.With recent funding by the NIH, we are expanding these studies to investigate the neural and endocrine mechanisms underlying vocal learning in budgerigars. In collaboration with Stephanie White (UCLA), we are comparing expression patterns of FoxP2 and other candidate ‘learning genes’ in adult and juvenile budgerigars of different sexes. 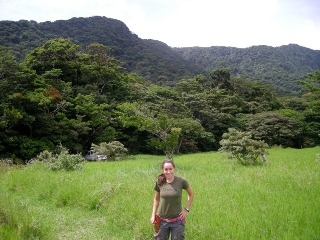