Located 9km southwest of the Cuajiniquil, La Cruz; this sector is accesible all year with 4x4 vehicle. This is a dry froest ecosystem growing on old sedimentary soil on the north part of the Península de Santa Elena and seperntine soils of the Península, this is geologically cosider one the oldest lands of Central America. At the Fila Playa Blanca and the Cerro Murcielago there is dry forest with a big part of deciduous species in a good conservation state. All of the coast or lower land rivers and creeks are stationary but they matain water all yaer at their upper part and springs. On the riverbed of the stacionary creks and rivers it is possible to find evergreen species such as Tempisque, Nispero and Ojoche.  At the west side of the Península de Santa Elena (Fila La Guitarra) there are 5000 hectares of dry forest, due its isolation and nature of the terrain this patch of forest is one of the most pristine and untouched patches of dry forest in Central America. At the top of these hills there is a special acumullation of clouds which creates evergreen vegetations with characteritcs of the cloud moutain forest. The cost are is very rich on marine biodiversity and has an important coral reef and mangroove at the Bahía de Santa Elena.  It is possible to find, dantas, pizotes, deers and monkeys which popullations are growing.

There is a main house for the staff and three old houses, camping area and electric power. 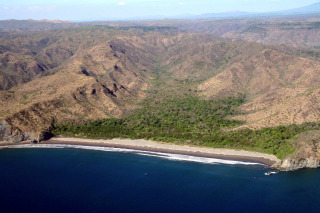